The story for ‘Weightlifting Fairy Kim Bok-Joo’ is inspired by the life of female Korean Olympic gold-medalist Jang Mi-Ran.

Kim Bok-Joo (Lee Sung-Kyung) attends the University of Korea while training to succeed as a professional weightlifter.

Her father, a former weightlifter himself and now the owner of a chicken restaurant, gives her his full support. He likes to express this by providing Bok-Joo and her friends with fried chicken.

Although Bok-Joo lives at the University Dorms, she enjoys quick visits to her fathers chicken restaurant, which is near enough the University to do so. Her close family also includes her young uncle Kim Dae-Ho, who works with her father at the restaurant.

Jung Joon-Hyung (Nam Joo-Hyuk) is also a student at the University of Korea and a top member of the swim team.

He shares a dorm room with one of his team members who has become his friend.

Joon-Hyung has an aunt and uncle looking after him and also a cousin, and get’s along well with them. Despite this, he seems to maintain a certain emotional and physical distance from all three.

This has especially his aunt concerned as she raised him since he was a small boy and loves him like her own son.

Kim Bok-Joo and Jung Joon-Hyung meet on University Campus and do not immediately hit it off. Joon-Hyung almost runs over Bok-Joo with his bycicle and the subsequent minutes leaves neither with a favourable impression of the other. 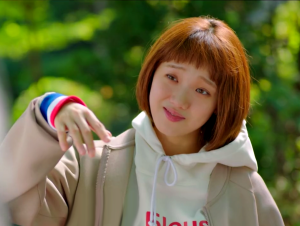 Not until some time later does Joon-Hyung remember that they met before, through a different incident, while in elementary school. Bok-Joo inadvertently saved him from a bad fall and they became fast friends.

Due to changes in Joon-Hyung’s family situation, he transferred to another school soon after. The memory of her and their actual first meeting prompts him to give Bok-Joo the nickname “Chubs”, which she is not a fan of.

Despite Joon-Hyung’s refusal to stop using her nickname and his occasional teasing, it is obvious that he likes hanging out with Bok-Joo. Bok-Joo comes to realize this and gradually starts to accept it in good humour. The two start spending more time together and develop a good friendship.

Kim Bok-Joo meets a young doctor and falls in love for the first time. What starts of as a good impression of his manners and his kind demeanor, developes into a fullblown crush.

Intent on winning his affections, Bok-Joo ends up in a web of lies  that could be detrimental to her. Both for her personal well-being and her promising future as a professional weightlifter.

Seing Bok-Joo romantically interested in someone else, Jung Joon-Hyung realizes his feelings for her go beyond that of friendship. Will he be brave enough to pursue her and fight for her before it’s too late?

However, nothing will be as challenging as figuring out who they are as individuals and choosing the person they want to become.

Lee Sung-Kyung and Nam Joo-Hyuk have the most amazing chemistry. One could already see this since episode 1.

In the memorable scene pictured below, Jung Joon-Hyung picks up Kim Bok-Joo after she falls into the swimming pool. He then just holds her while looking at her for several seconds and her looking at him.

After that moment, there was no doubt in my mind that these two were going to sell the whole couple thing. They are just one of the most adorable and cute characters I’ve seen.

The gradual way in which they fall in love and learn to acknowledge that they care for each other is a refreshing experience. 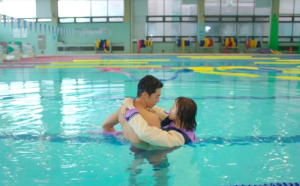 I love how Joon-Hyung is so confident without being arrogant. How he has this completely sweet side to him and is not afraid to show it at any time.

Bok-Joo is confident when it comes to her weightlifting as well, but when it comes to just being a girl, she is vulnerable. It is endearing to see her balancing her dream to become a professional weightlifter and her desire to stay true to herself as a girl, a person.

Of course the rest of the cast is just the right amount of comedy and disaster to complete the story line and move it along at a steady pace.

Kim Bok-Joo’s loyal friends are the envy for many of us and Jung  Joon-Hyun’s sidekick (portrayed by Joo Ill-Woo) is just nosy enough without being annoying.

Also, after watching this, who doesn’t want their father to own a restaurant. And to treat them and their friends to delicious fried chicken like Bok-Joo’s father does.

I cannot gush about this drama without mentioning that it contained a long list of cameos. However, the tree that stood out the most to me where of course Lee Jong Suk **squeal**, Ji Soo **<3** and Kim Seul-Gi as I’m a big fan of all tree.

The following was a minor detail and in no way affected my overall enjoyment of the drama: I was left wanting more scenes showing the blossoming ‘something’ between Jung Joon-Hyun’s sidekick and one of Kim Bok-Joo’s friends.

Mostly because I was shipping them since the beginning and so hopeful the writers/directors would hear my silent plea. Alas, it was not meant to be. 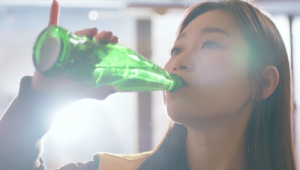 Last but not least, I would like to make an honourable mention of Kang Ki-Young as Kim Dae-Ho, Kim Bok-Joo’s uncle. I’ve come to enjoy how this actor keeps stealing drama moments while giving his usually somewhat quirky characters his own comedic style. 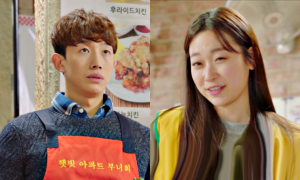 I truly enjoyed ‘Weightlifting Fairy Kim Bok-Joo’ all the way to the end. It was nice that the story-line continued past college/university life.

This allowed us a glimpse at the further growth of the characters, both professionally and personally. It also gave us a chance to watch their relationship develop some more.

And I was so glad there was no overbearing let-me-make-things-difficult-with-useless- drama act from Kim Bok-Joo’s father.

Any plots and loose ends where revealed and neatly tied up without being rushed. Including the love triangle involving the uncle and Kim Bok-Joo’s coaches (props to actress Kim Seul-Gi for her funny cameo).